From Masafi, all the options seen on Google earth and the UAE off-road book I have, lead to dead ends. I don’t blame either, everything changes so rapidly around here, it’s impossible to keep up. The Google image is from 2013. Imagine how many roads they have built since then. As a result, I am wasting the entire morning searching in vain, and finally surrender to a little road detour towards Bithnah in Wadi Ham.

Wadi Ham was the main connection between Fujairah and the western Emirates for many centuries. As the only trade route available, it was guarded by a series of forts and watchtowers, here either to protect or ransom you depending on the mood. There is little information on those forts, and the person on site serving as a guide won’t tell you much either. I have a feeling the version we now see are inspired, or were built, by the Portuguese who controlled the area in the sixteen century. With a very few exceptions, every single fort I have seen in the region, Oman included, is build in the same mold, and looks as if it was erected around the same time. It also looks like they all have been recently “renovated”, as most look like new.

The other main distinction of the area is the large number of quarries. Slowly but surely, every mountain in Ras Al Khaimah and Fujairah seems destined to extinction. Endless queues of trucks filled with stones jam the roads on their way to cement and tiles factories. RAK ceramics claims to be the largest tile manufacturer in the world. I wonder what they are gonna run out of first ? Oil, gaz, water or mountains ?

To find a way out of this maze is a bit tricky. At one point, I end up at the entrance of a well guarded quarry that wasn’t even supposed to be there. By the size of the mountain still standing behind it, you guess the quarry is just starting it’s grind. I’m too close to my “connection” and wasted enough time today trying to find a way to turn around now. Off course the guard isn’t letting me pass trough. Those have orders instead of a brain, no point arguing. After a brief survey of the surroundings, I decide to contour the obstacle and create my own “diversion” on this trail. As expected with the opening of this new mountain killer, the rest of the trail behind it is no longer used. Its sorry state forces me to pay very close attention to were I put my wheels and drops my pace to near 0km/hour. Still I managed to find a way, a very scenic one actually. I’m happy.

Now comes the time to look for camp again. 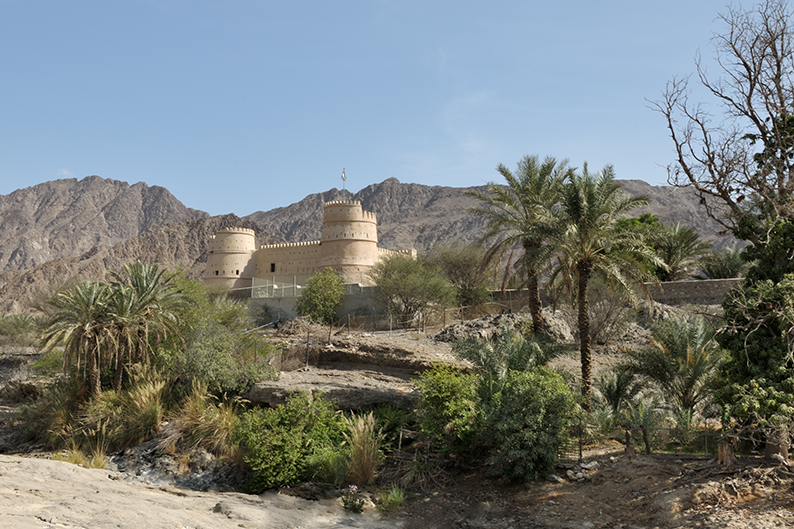 Letters from the Oman Trail – The end of another day