Letters from the Oman Trail – Nasser the farmer
Prev Next
Search

After a pleasant and refreshing brake on top of Jabal Sham, it’s time to go back down towards the ancient city of Al Hamra and then on to the fort of Balha. After that I’ll go find refuge from the valley’s heat deep inside the Al Hoota cave. As yesterday was physical, today shall be cultural.


At the bottom of Jabal Sham is Wadi Ghul (the grand canyon piercing through the Jabal Sham range). It gets its name from the old village erected at its entrance. It’s now deserted, as its inhabitants have migrated across the wadi bank to more modern accommodations in the new village of Al Dhuwayhir. As often, the palm gardens and crop fields of Al Ghul are still used and cared for. The rain from the past few days was a blessing, and local farmers are busy this early morning making sure they can get the most out the fresh water before the heat becomes unbearable. 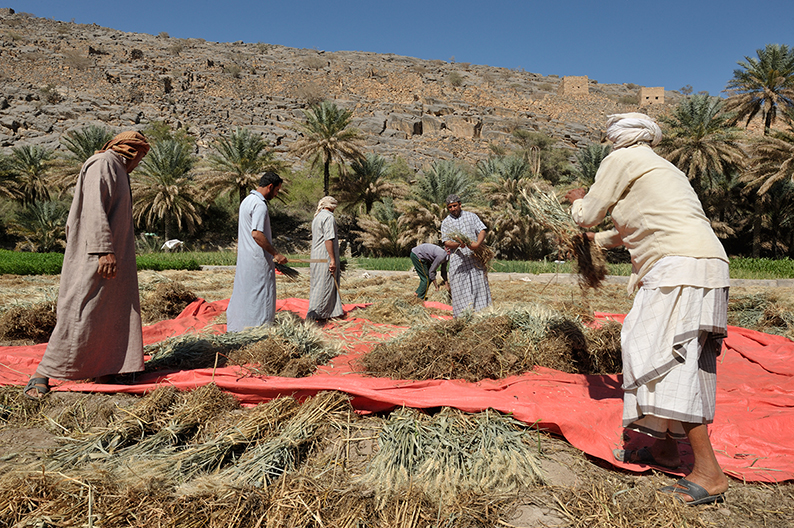 And unbearable it already is for the first groups of tourists who stop for a quick shot of the Al Ghul ruins on their way to Jabal Sham. Confined in the air-conditioned comfort of their rented SUV, they don’t even dare rolling down their car windows for a better picture. No chance for a selfie shot either I guess. It’s never very attractive anyway when you’re sweating buckets.

As I approach the terrace fields, everybody stops to greet me. Curious to know who I am, where I am from, and where I am going. They want to share with me the fruit of their labor, show me their crops. Mostly wheat and a few other cereals, growing on small parcels irrigated by the traditional falaj. The oldest man asks for my hands and pours in some grains for me to taste. I hesitate for a few seconds not knowing what to do – I have never taken a bite in raw wheat grains before – so to clear my doubts, he puts the rest in his mouth and begins to chew. It is hard as a rock and I’m tented to spit them out before I break a tooth. But that would be so rude, I have no other choice to keep on chewing. After a while you start to feel the taste of flour. It’s not bad actually, but I guess it’s too early in my cultural learning curve to fully appreciate the delicatessen for what it is, and now I wish I had taken water with me to politely rinse it off. I think he knows how I feel. Probably played that trick before as I see that revealing spark of joy or malice pass in his eyes, as I discretely hide the remaining grains in my pocket. I smile, wish him the best and return to my car. I have to reach Al Hamra before it gets really too hot.